An interesting prediction of general relativity is that light does not just travel in a straight line, but its path is bent by gravity. Gravitational lensing is the name for the bending of light by gravity, as the source of gravity (e.g. a galaxy) acts as a physical lens which bends the light. There is ample observational evidence of these deflections of light by massive bodies, including measuring the deflection of starlight passing near the Sun. However, the largest observed deflection of light is only very slight, around 11 arc seconds or 0.003 degrees. 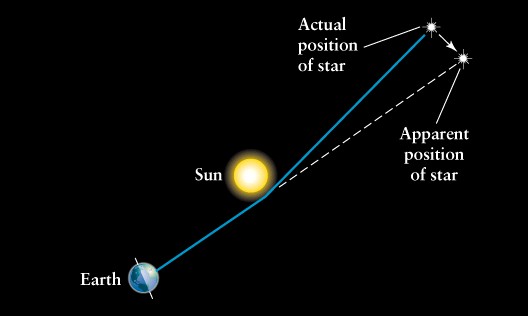 The SXS Lensing group is interested in much more eXtreme deflections of light. Near black holes, the most compact objects in the universe, light can be so strongly bent by gravity that it can orbit many times around the black hole before making it to your eye. In theory, there is no limit to the number of times a light ray can orbit the black hole. Even though black holes emit no light themselves, their effect on light passing nearby leads to some stunning visual and mathematical results!

We have written code to produce images of stars from a star catalog, such as the 2MASS catalog. We take each star’s location and its magnitude in different color bands from the catalog. To generate the image, we need to know from where light enters each pixel of the camera as well as the redshift of the light. More details are provided in our paper. Below is an image showing the Milky Way using our star rendering code. Note that we do not use any raster images, we are simply rendering many stars to produce all the light in this images. 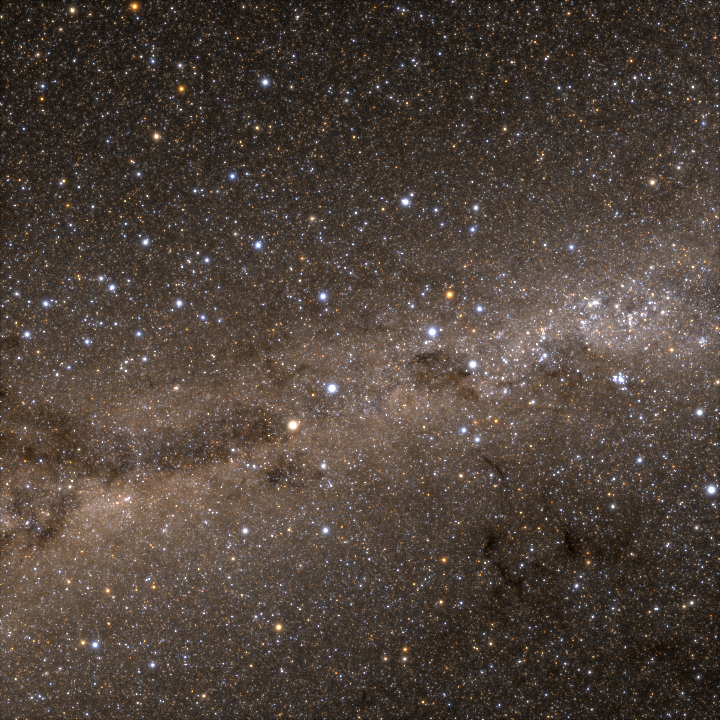 With our camera pointing in the same direction as the previous image, we now see how a black hole affects light from these stars. The first feature that pops out is a large circular shadow in the center of the image. This is called the shadow of the black hole, because it is a region where the black hole prevents light from reaching the camera, such that the black hole is casting a shadow on the image.

Near the borders of the image, light from the stars is slightly deflected. Notice the dark patches where there aren’t many stars in the lower right portion of the original image. These appear to be located near the lower right corner of the image now, due to the gravity of the black hole. This is analogous to the light being deflected around the sun, making a star’s apparent position somewhere else, as depicted earlier. 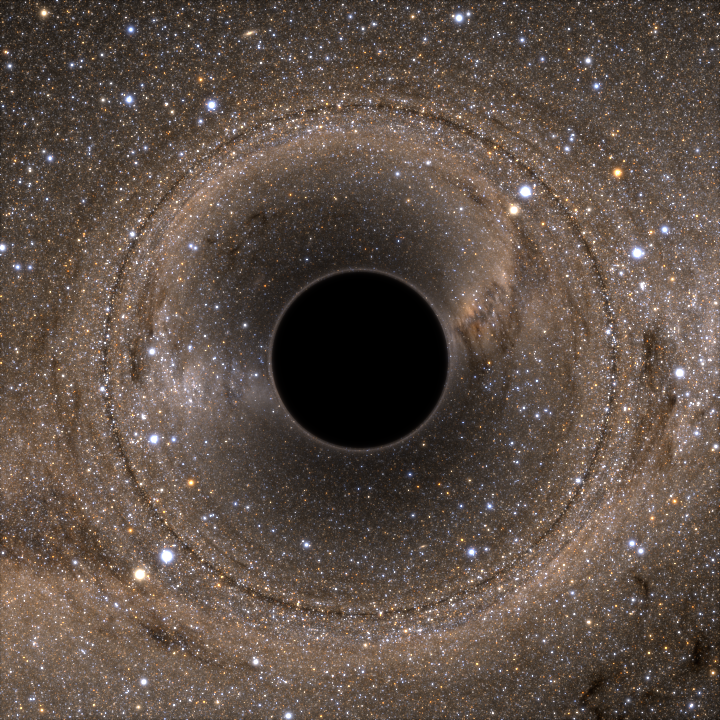 Although it is hard to see, very close to the shadow there is a bright ring. This is actually the second Einstein ring, corresponding to light from directly behind the camera. In fact, there are an infinite number of these Einstein rings in theory, but we can only resolve two of them in this particular image.

While lensing by a single black hole has been studied for quite a long time, no one had previously known what astrophysically interesting binary black holes would actually look like. The problem is complicated significantly by having to solve what happens to two black holes orbiting each other. The SXS collaboration uses the Spectral Einstein Code (SpEC) to simulate these kinds of compact object mergers, be it with black holes or neutron stars with high accuracy. With SpEC, the SXS Lensing group is in a unique position to explore what a binary black hole merger would look like.

In the following video, we see the last three orbits of a three to one mass ratio binary with arbitrarily chosen spins on both black holes. The details of this merger can be found in Taylor et al. as case 4. The stars used are the same as the ones used in the single black hole image above. The camera is located above the orbital plane of the binary looking down. 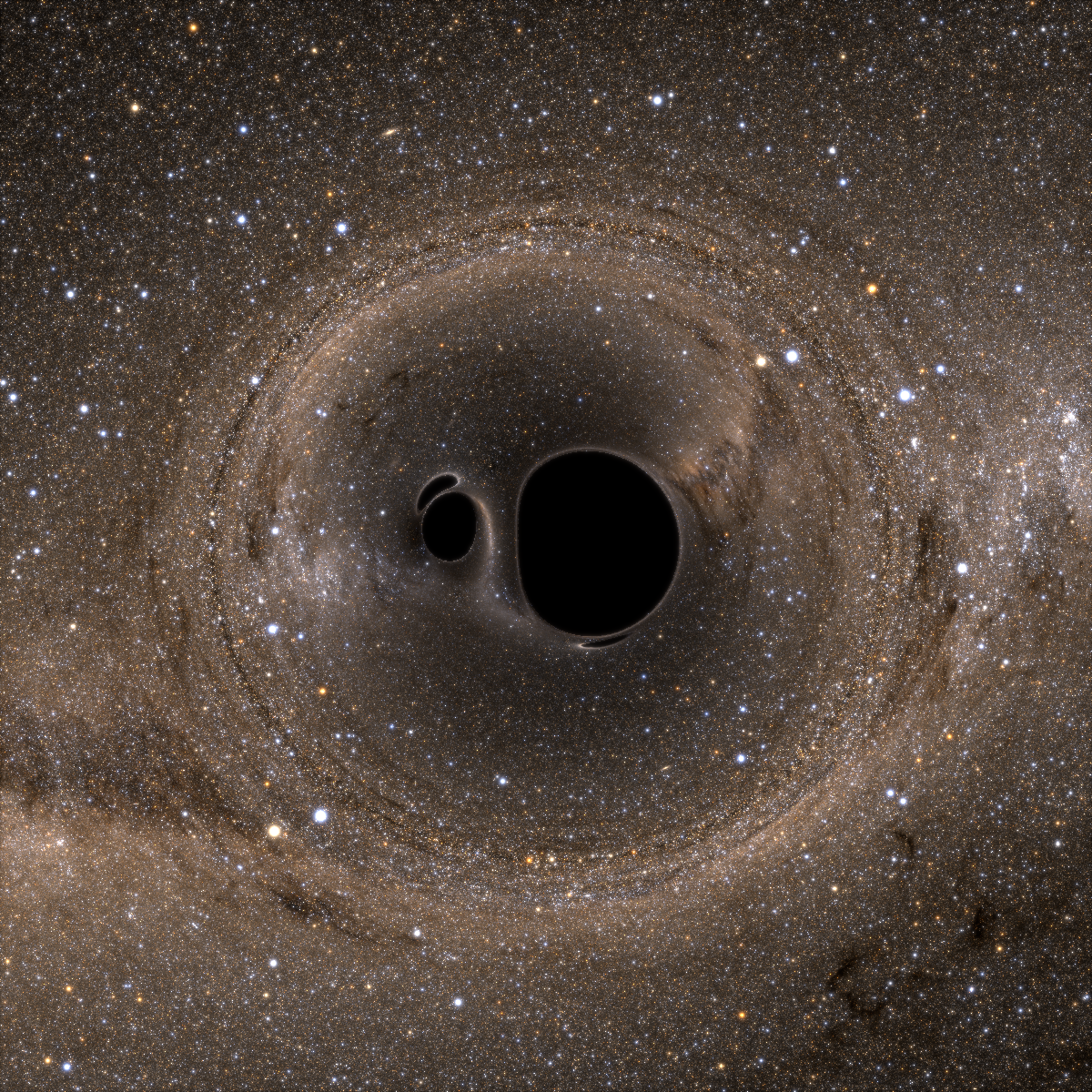 We see an Einstein ring surrounding both masses. This is not general, however. When the black holes are separated by a large distance spatially, we could see an Einstein ring around each black hole individually. Near both shadows we see a smaller shadow, which is called an eyebrow due to its shape. These secondary shadows correspond to one black hole casting a shadow which is lensed by the other black hole on the way to the camera. Our paper explores these smaller shadows in more detail, finding that there are in fact an infinite number of these shadows, but we can only resolve a few in this video.

We have another viewpoint of this merger, shown below. The opening angles of the cameras were slightly different for this video, so we also provide what the background stars would look like with these new parameters. 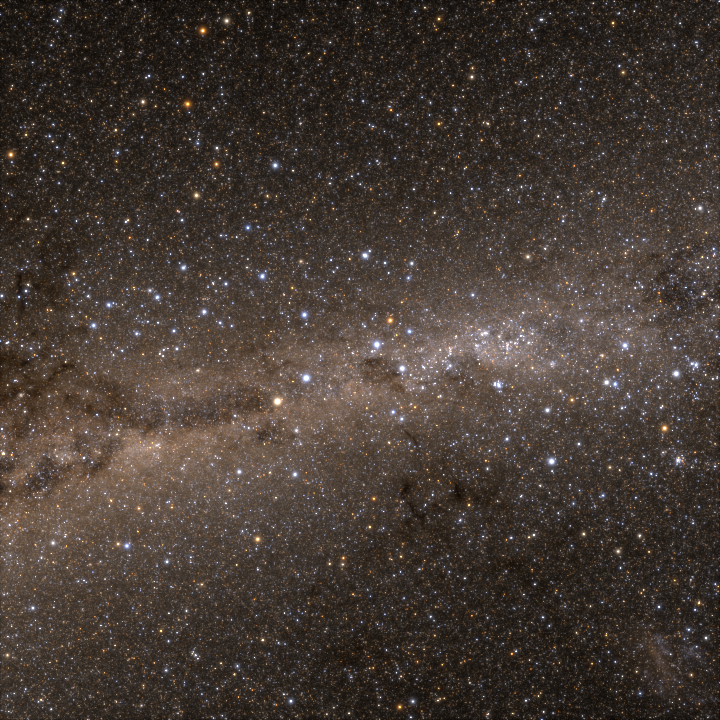 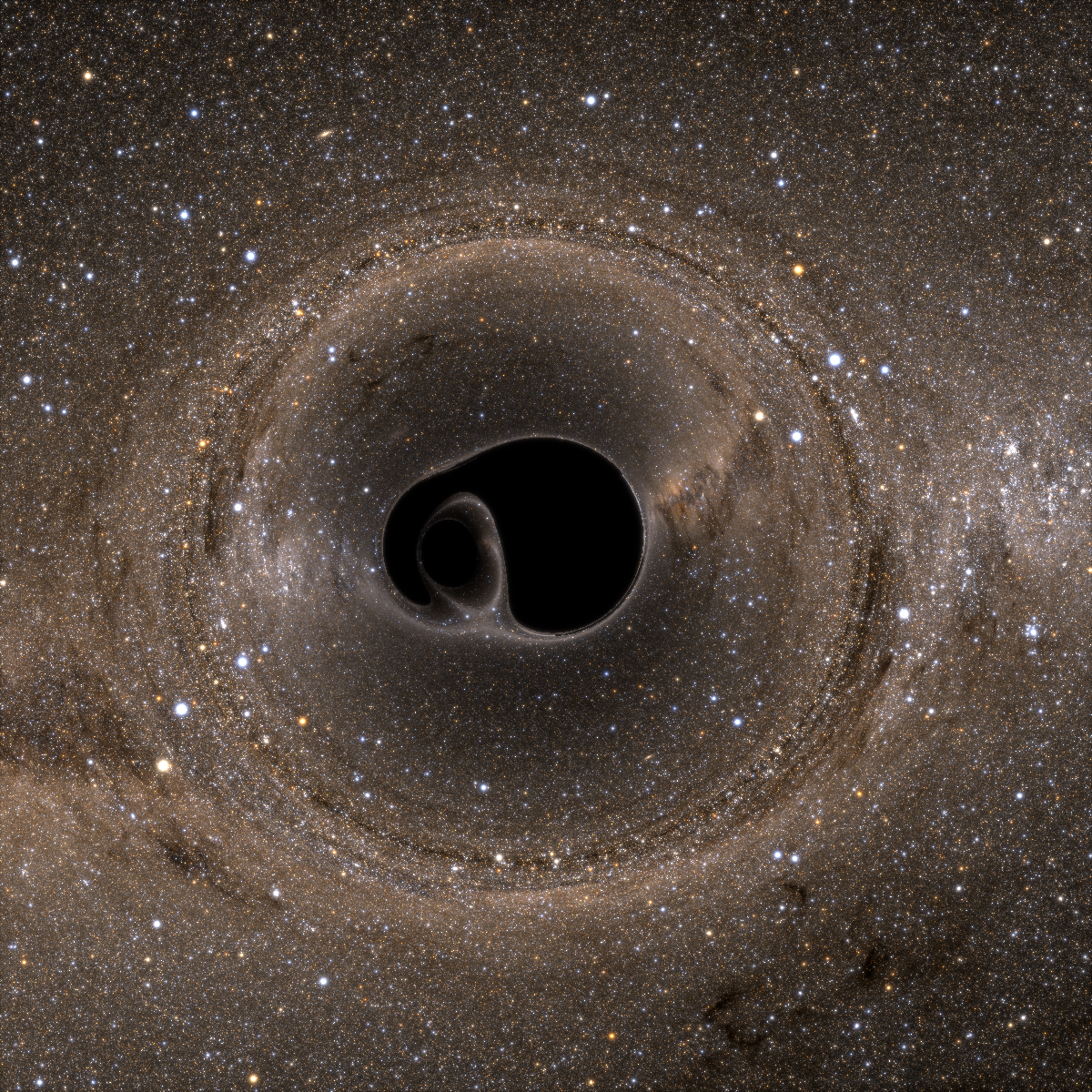 In this video, the camera is essentially located in the orbital plane of the binary. This is what we call an “edge-on” view. As the black holes orbit, one black hole passes behind the other relative to the camera. As this happens, the shadow cast by the farther black hole is lensed by the closer black hole into a ring-like shadow. Additionally, we can see the effect that the arbitrary spins has on the orbit. The orbital plane precesses visibly in these last three orbits before merger. As before, we see that the lensing settles down to look like lensing by a single black hole.

We have some interesting brightness effects which are more apparent from this viewpoint than the previous video’s viewpoint. Some photons passing through the binary system have accumulate non-unity redshift. The brightness is affected by the redshift by a factor of redshift cubed, so there is a large brightness change for only a small redshift difference. Overall, near the left side of the shadows we see the brightness damped significantly, while on the right side we see flashes of brightness!

While looking at black holes in front of a field of stars, it is easy to lose your bearings. In our paper, we frequently color sections of the sky with a grid to more easily understand the deflection of light by the black holes. A more fun way to accomplish this is by using a recognizable image. Instead of using stars, we therefore use a picture of the clock tower at Cornell. 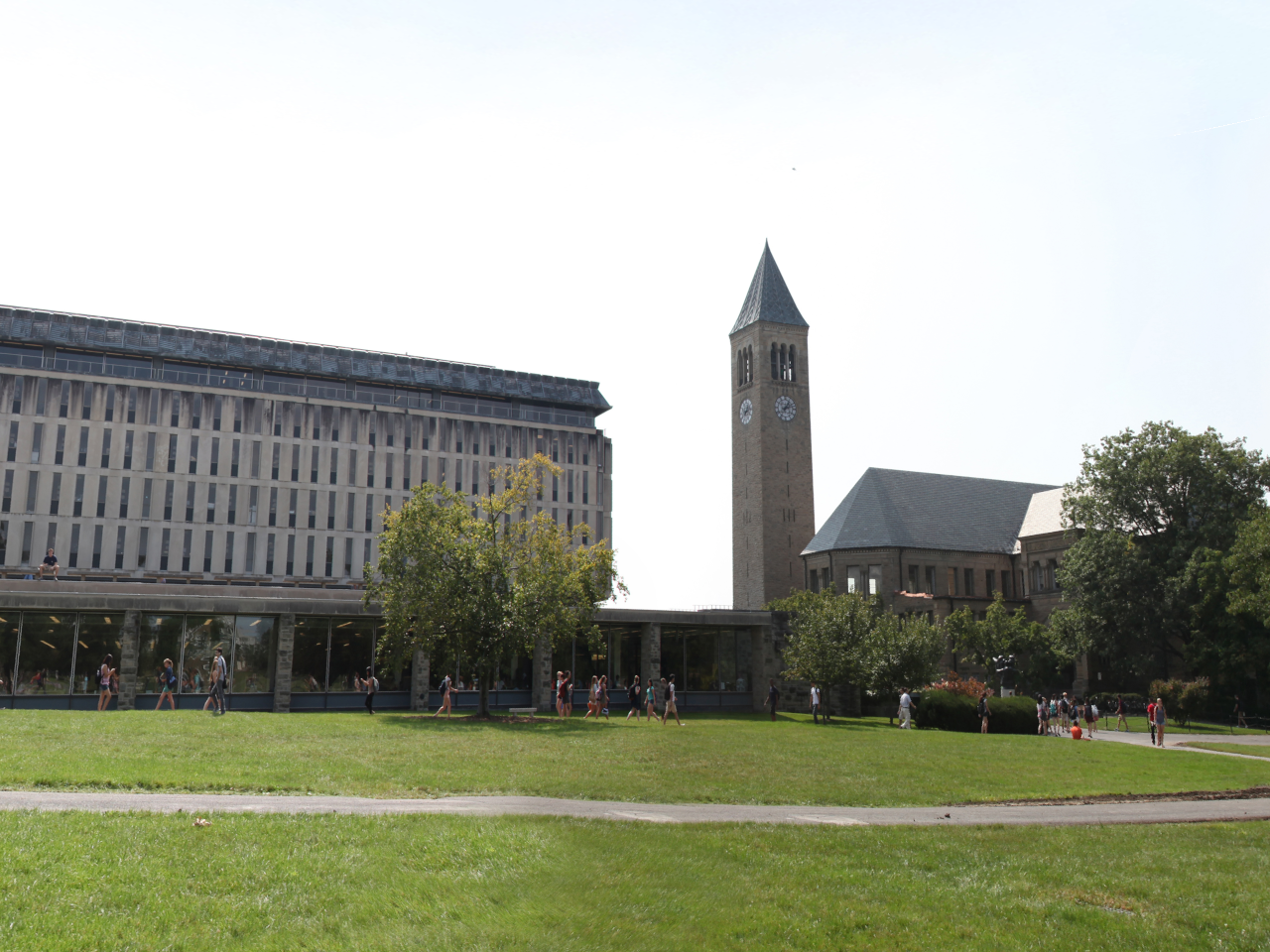 Now we stick a black hole on campus, because we can and it’s awesome. We can see clearly that near the edges of the image, the view of campus is only slightly changed. The image of the clock tower is bent slightly. However, inside the Einstein ring, we can see the size of the deflections grows. The image is also inverted. The clock tower here is on the left and is upside down, in addition to being even more bent. The grass is up and the sky is down inside the Einstein ring. 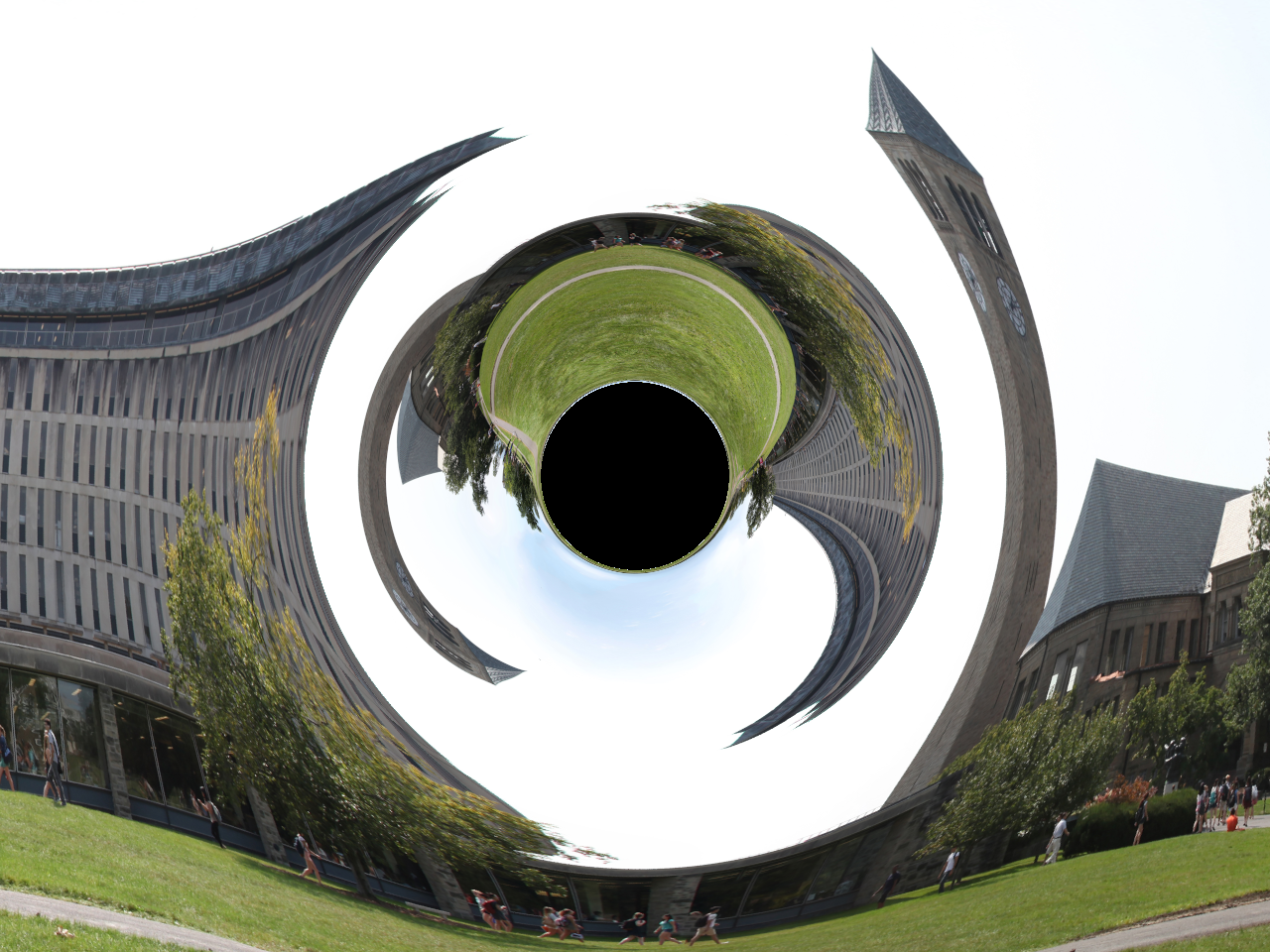 If we can put one black hole on campus, why not two? This is the same binary discussed in the Binary black hole section. It is a three to one mass ratio binary. The same discussion of an infinite number of black hole shadows applies here as well. 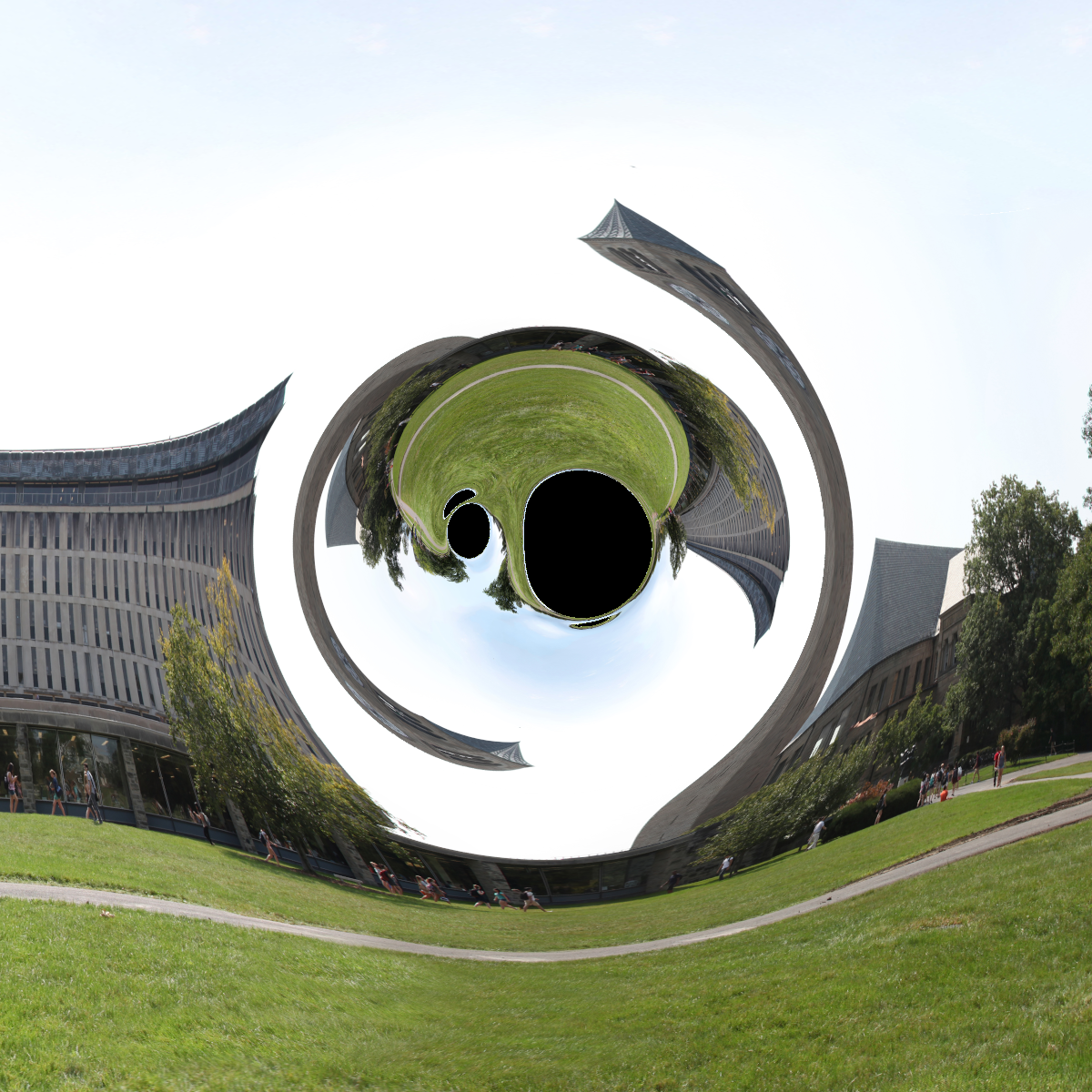 We modeled the disk as a thin disk orbiting around the black hole the equatorial orbital velocity. The disk extends from 5 to 17 solar masses, and was given temperature profile dependent on the radius as , which is physically motivated by energy balance. To make the disk look more realistic, we introduced arbitrary density and temperature variations across the disk. Finally we added a nice big Hollywood glow!

So how did Interstellar do? Let’s compare the images directly. 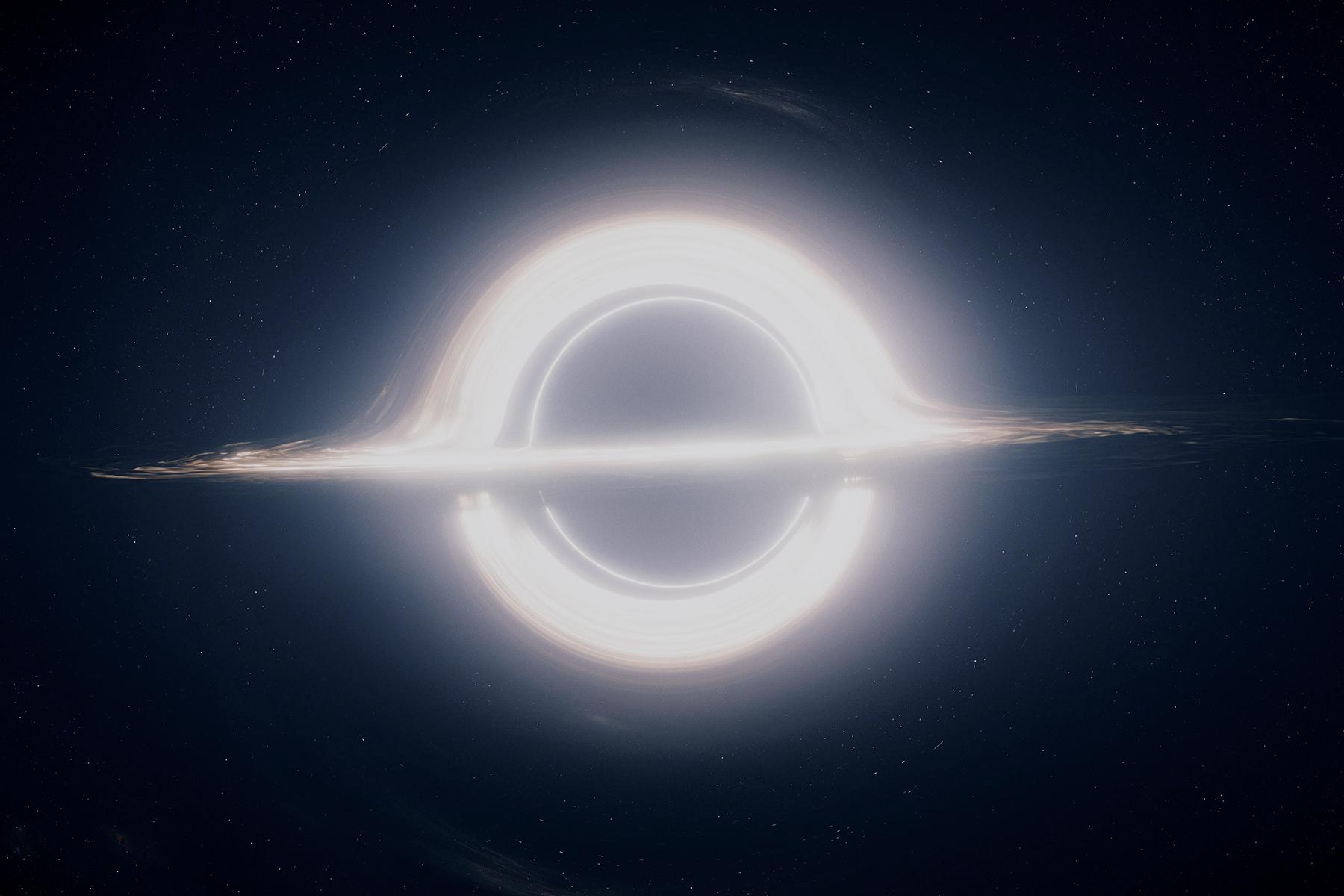 Apart from looking really great just aesthetically, the Interstellar disk shows the correct light bending effects. However, you may notice it looks very uniform in color. Did they forget to include redshift physics? It turns out that they had produced more physically accurate visuals, but decided to omit redshift and brightness effects intentionally to try not to confuse the audience too much.

Partially due to the timing of our paper with the release of Interstellar, and due to how beautiful our visualizations are (to me at least), we have gotten a lot of attention for our work. In fact, our videos will be shown in an upcoming PBS NOVA documentary about black holes!

Here is a list of some of the places where our work was discussed: